A magazine, which is dedicated to foreign affairs and political movements, publishes an article about the dating habits of twenty-somethings? Well, it might seem a bit confusing at first, but our very personal and intimate relationships are more related to a broader social issue than you would think. 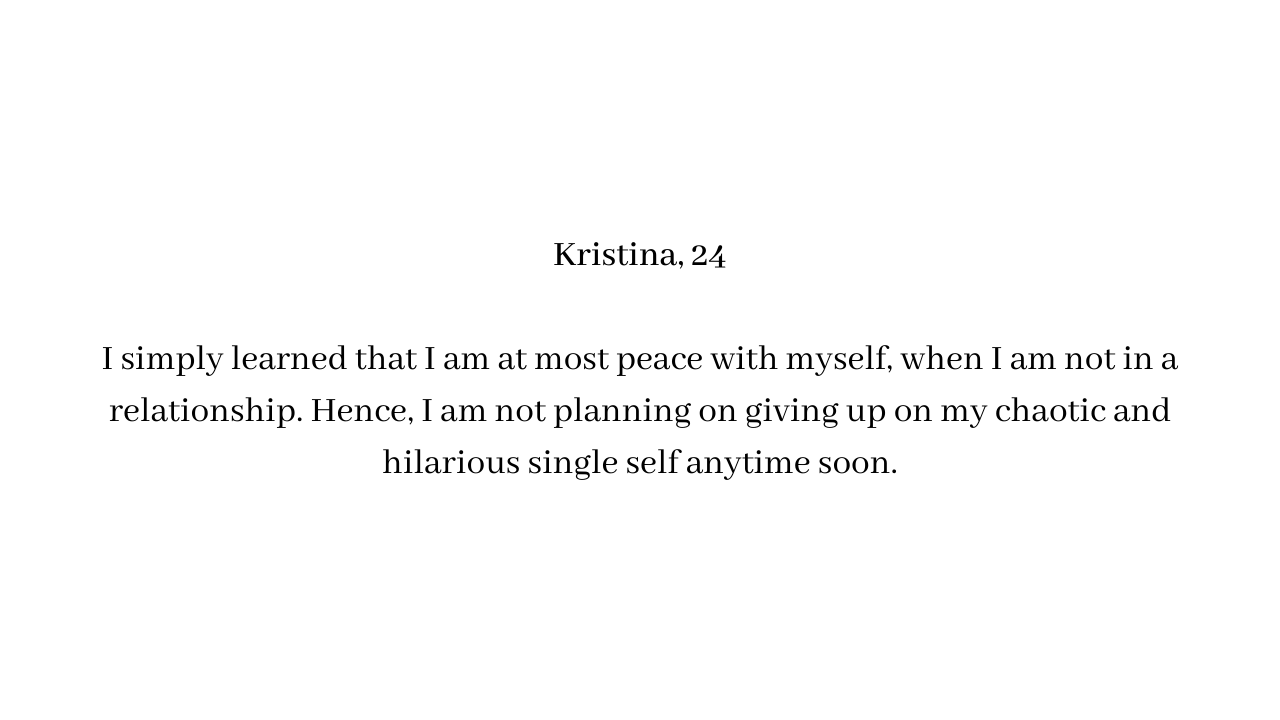 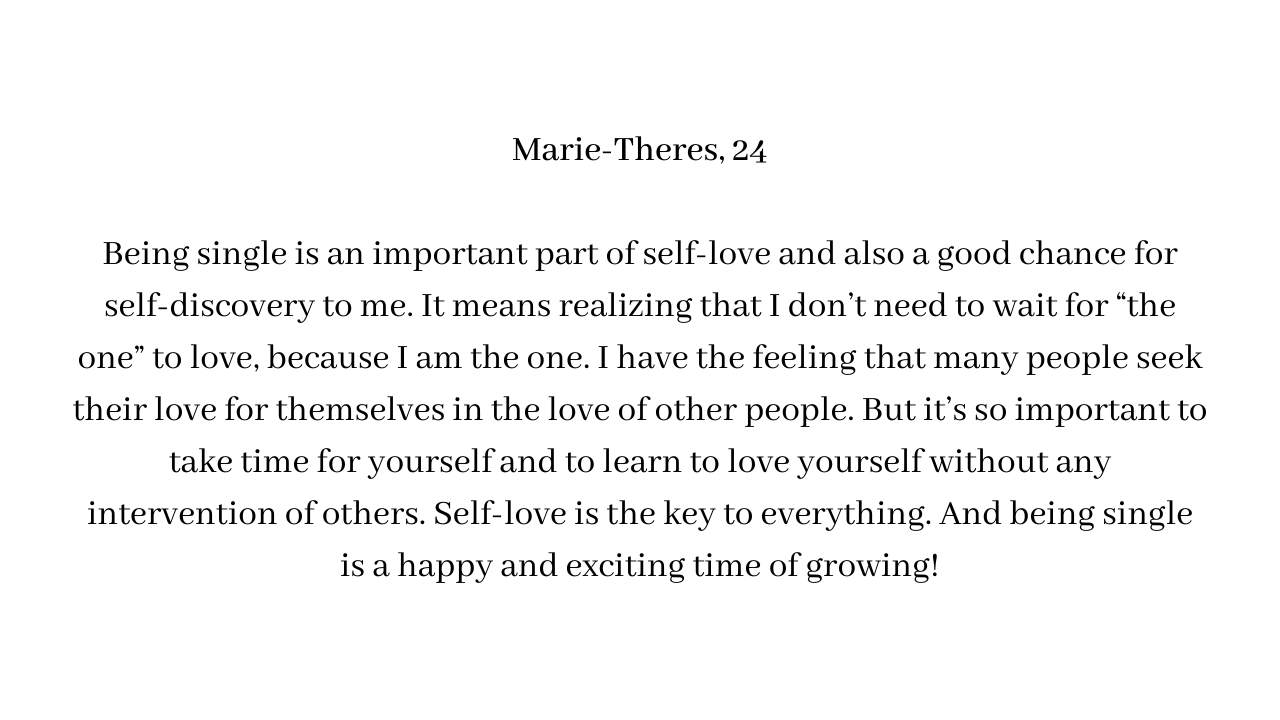 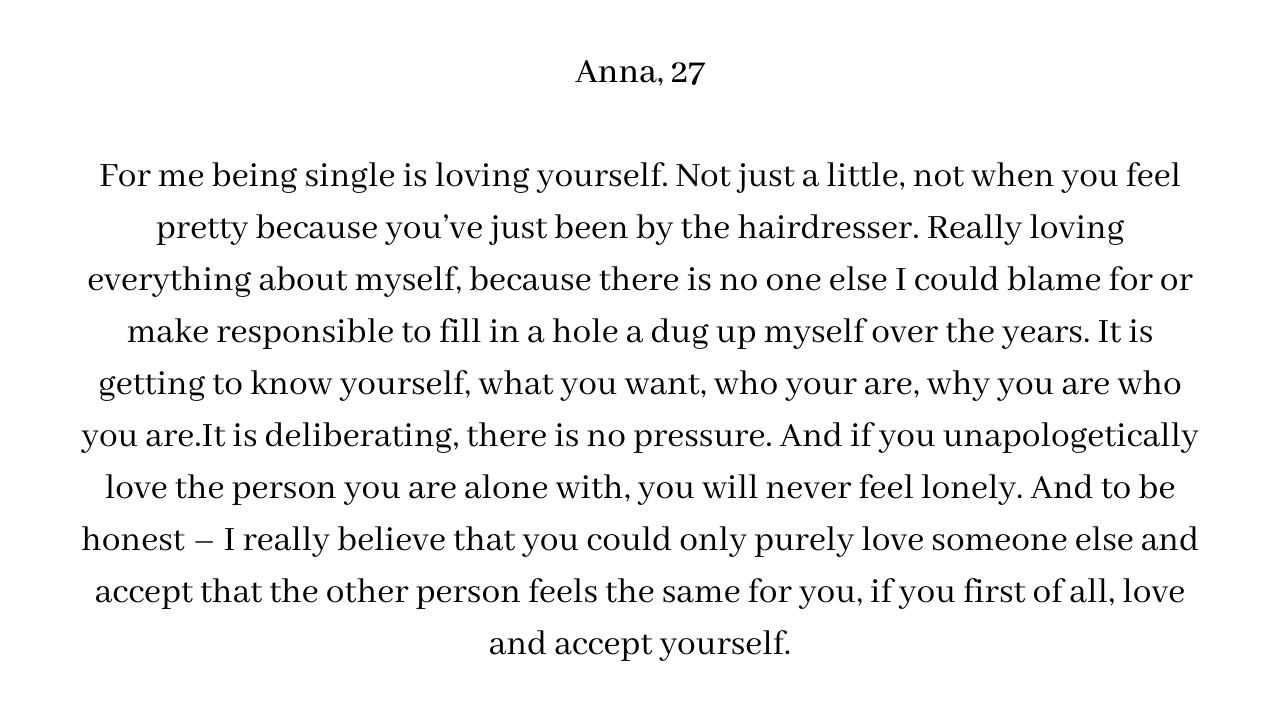 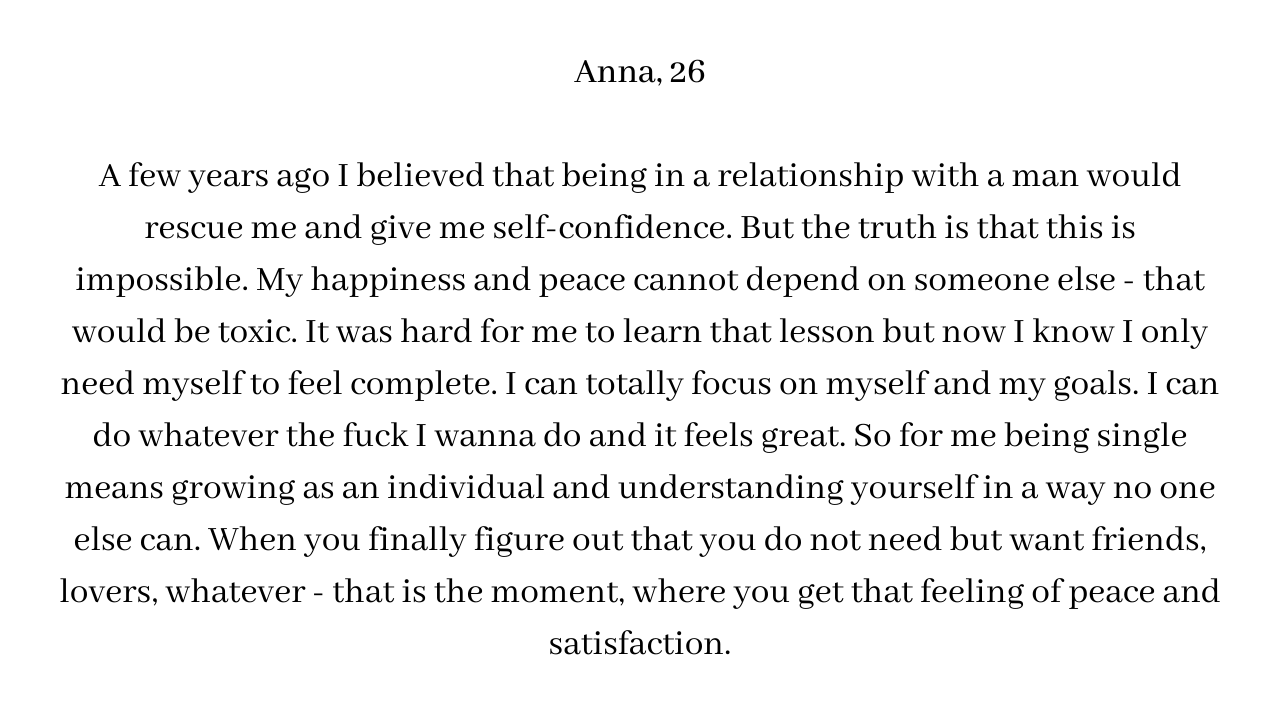 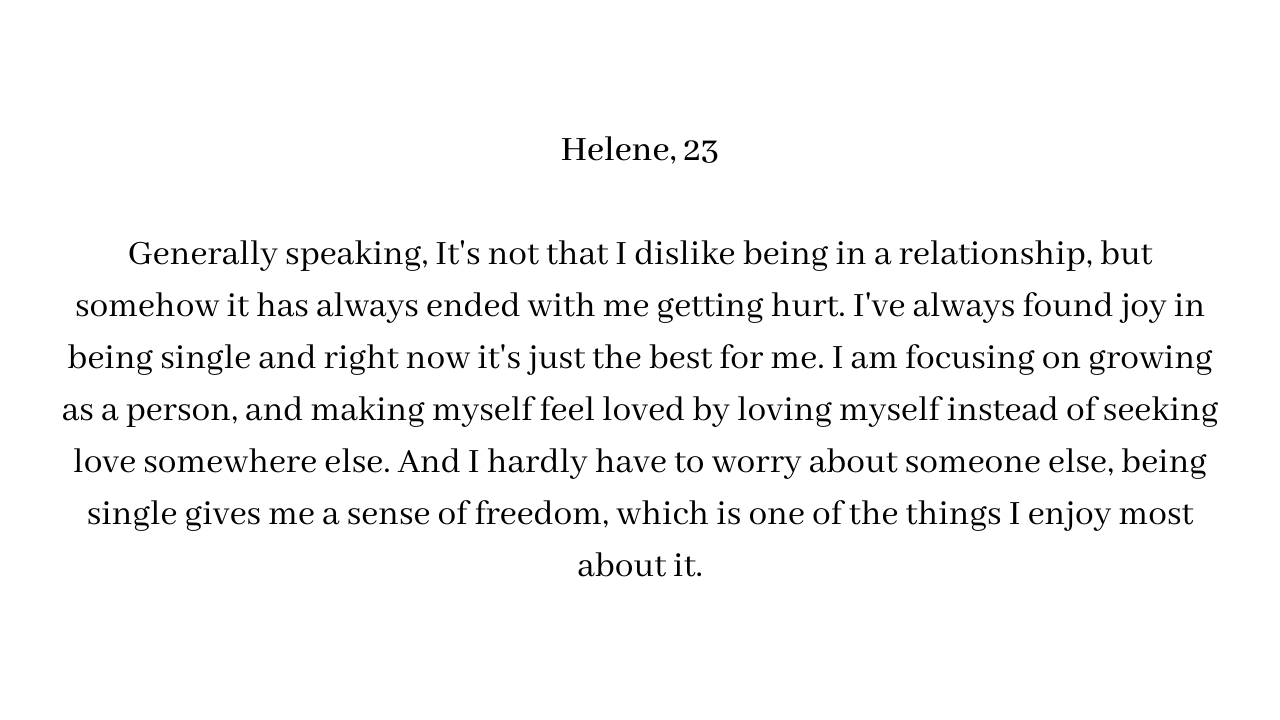 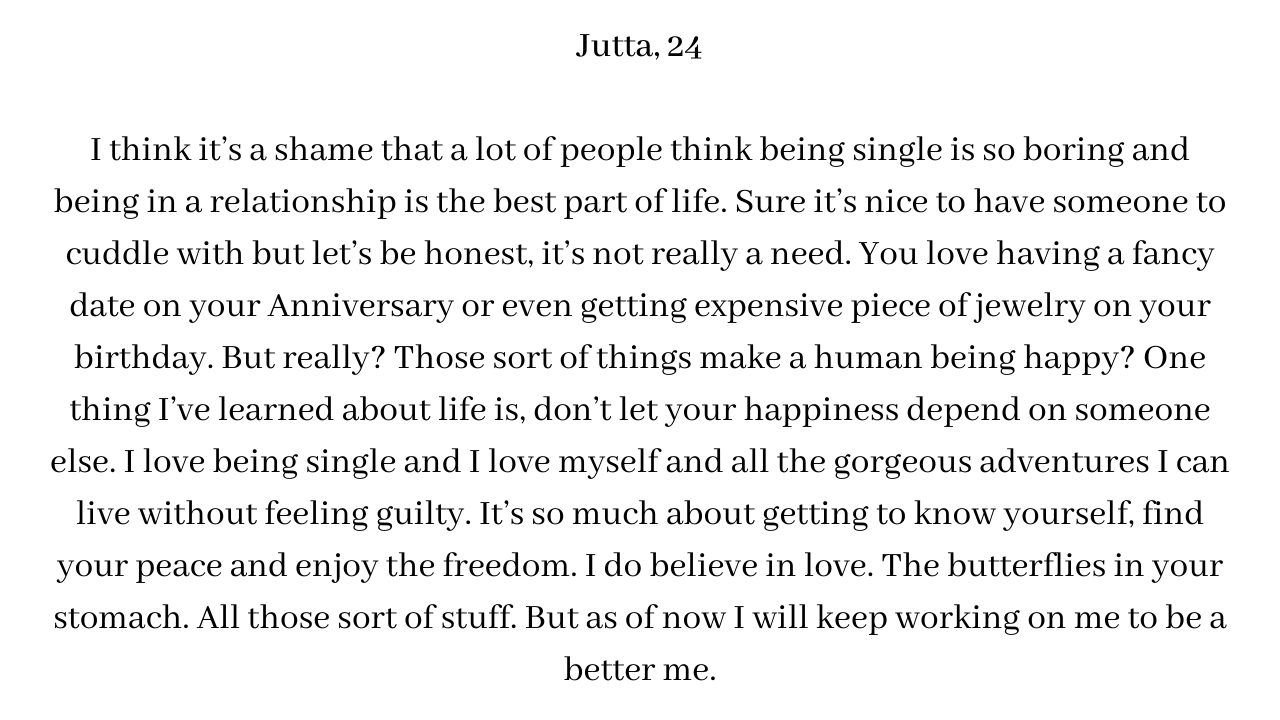 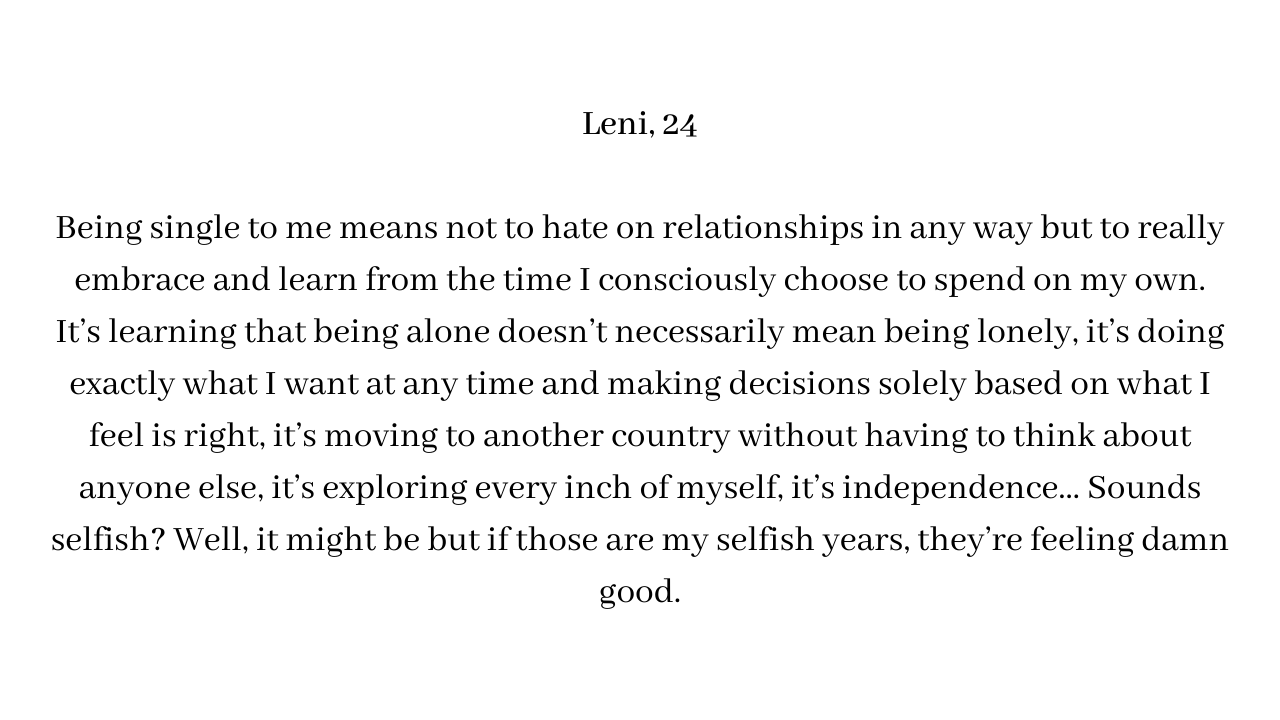 Way too often being single is seen as an unintentional stop on the way to a next relationship that will lead to a fulfilled life with a long-term partner. It seems to be easily forgotten that being single can also be your chosen final destination. It almost confuses people, when someone tells them that they are not dating with the main purpose of finding a partner. And this reaction is not surprising, when there are studies out there that display an image of sad and lonely millennials. Some even claim that our lack of (or too little) income and too much stress at Uni or work are the reasons for the high number of singles in our generation. The same factors are also used to explain why we choose renting a place over buying it. If I didn’t know better I’d almost believe that we are a generation of broke and highly depressed loners with commitment issues. Anyhow, there are other studies and articles that paint a picture of self-empowered individuals. Tinder published a survey that showed that 72 percent of the 1000 participants made an active choice to remain single. A generation of young people that don’t need a traditional relationship to feel fulfilled. Is it just a coincidence that the most educated generation is also the one that says farewell to traditional life-goals?

About relationships and happiness

The celebration of singledom has become an empowering movement over the last years. If we take a closer look, we will see that the main voices behind it have some things in common: They are all twenty-somethings, single (or in non-traditional partnerships) and identify as female. Before you pity any of them or even call them bitter single ladies, you should know that unmarried women without kids are the happiest group of people. Ironically men are healthier, when they are in a stable relationship. Taken this terribly outdated binary-based gender approach aside, it seems as if being in a heterosexual relationship is a rather unhealthy decision for women.

This does not mean that everyone should be hating on the male gaze or relationships in general, neither does it mean that the unhealthy aspects of relationships are related to the genitals one is born with. It is more a problem of social constructs and, as a consequence of that, also of toxic masculinity. From an early stage on almost everyone is conditioned to fulfill certain roles. Women are supposed to suppress themselves and their needs. Men on the other side are conditioned into being strong, whilst also being taught to deny their emotional side. Both can be really unhealthy in the long run, but especially men and the role they are taught to fulfill can become highly toxic for their partners and their relationships. It can lead to an inability to communicate feelings and emotions or non-appreciation of partners and their actions. A consequence of that could be ending up in an unequal relationship, were one party nurtures the other one, without getting anything in return. And now it makes sense that women become miserable in relationships with men, when society, radically spoken, is teaching the male part of the world population that they are superior over everyone without a penis. But those beliefs and habits can be unlearned and therefore, the genitals one is born with shouldn’t be used as an excuse for being a bad partner.

For a long time being single, especially if you were a woman, has been seen as an equivalent to being a failure. Not that long ago, it was even more “tragic” to be a pregnant single woman. In Ireland some unmarried and pregnant women were even brought to so-called Houses of Shame. Which were a dangerous and harmful environment for both, the babies and their mothers. To full extent it became clear, when investigations earlier this year showed that over 800 children died in Irish mother and baby homes from 1925 to 1961. As you can see shaming women for embracing life in all its aspects, regardless of their relationship status, has a long history and could even lead to ending up in life-threatening circumstances. Even though, those official organizations, which were established for the purpose to punish women for not fitting into the rules of society, are less common in most parts of the world nowadays, some women still think that it is safer for them to stay in relationships that make them unhappy, instead of breaking them up. But, as mentioned above, young people are more and more likely to see that being single offers you more than an unhealthy partnership could. I know that I am diving into a sensitive topic here, so please note that I am not talking about severe physical or emotional abuse. I am talking about about staying with someone, who does not fulfill you, makes you unhappy or is taking advantage of you.

The question that comes up now is, why do some people still stick with their partner even though there is no rational reason for it? Well, it is not always that simple and sometimes people need to be nudged into making themselves less miserable. Artist and writer Florence Given empowers people worldwide to dump their spouse. About one year ago she broke up with her boyfriend and since then she did not only motivate other people to end their unhealthy relationships, but also spread a positive message regarding singledom. Her work inspires people to see dating more as something fun and exciting, rather than an instrument to find a new relationship. Her journey showed that letting go of the need to find someone else will eventually lead you to become closer to yourself.

Another woman I admire from afar is Ruby Stevenson. The non-monogamous bisexual sex educator is spreading her sex positive vibe and body positivity. Both topics have to be mentioned when we are talking about single life. Not being in a relationship does not mean that someone can’t or shouldn’t have sex, even though, women are being called out for satisfying their sexual needs by themselves or with sexual partner(s) and embracing their body, regardless if it fits society’s beauty standards. Stevenson takes it one step further, as she explains in an Instagram post about one of her public talks: “Being a slut is an attitude, and transcends the number of people you’ve slept with or what your sexual preferences are; it’s about embracing your sexuality with confidence.”

So please - in case you ever recognize that someone is being slut-shamed or you are experiencing it yourself, keep in mind, that being a “slut” is nothing to be ashamed of. Reclaiming words that are used to shame certain groups of people is a powerful move. Not only words that have an openly negative association, such as bitch or slut, should be reclaimed. Also the relationship status “single” itself should no longer stand for being depressed and lonely, because it can be the exact opposite!

So basically, as soon as you realize that being single has nothing to do with being miserable, you will see that there is nothing to be afraid of and you will learn to embrace the independence that comes along with it. If you are in a happy and equal relationship, that’s great! But you’re not weird for not wanting a relationship and guess what? You don’t need one! You want to see that movie and finally have dinner at this new restaurant? Take a friend out on a fun night or just go by yourself. You prefer casual hook-ups over relationships? Just make sure to get yourself tested for STDs from time to time, have safe sex and you’re good to go. Do whatever you want to do, as long as you’re happy with it. What I’m trying to say is, and I can not stress this enough, don’t let anyone ever tell you again that you need a relationship for anything.